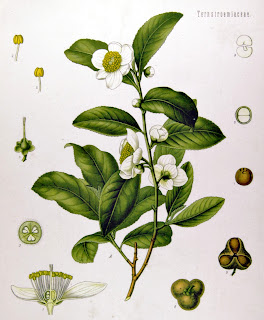 “Steampunk is like tea.”  I am sure there are many and varied responses to this simple comment.  Outrage, confusion, thoughts that the good gentleman is off his tree, or barking mad.  But, it is true.  Steampunk is like tea, and I shall prove it to you.

Strictly speaking, tea is an aromatic beverage commonly prepared by pouring hot or boiling water over cured leaves of Camellia sinensis.  And like tea, Steampunk also has a common definition, being that it is Victorian Science Fiction, a subgenre that incorporated technology and aesthetic designs inspired by 19th-century industrial steam-powered society.

However, the whole tea definition is far more complex than just being a beverage prepared from the cured leaves of the Camellia bush.  Tea is so much more.  Firstly there is black tea, oolong tea and green tea.  All three are made from the leaves and buds of Camellia sinensis, but the curing processes used to create them vary.  Each has a different level of withering and oxidation, with green tea having the least, and black tea the most.  But further to that, there are many varieties and blends.  For example, the varieties of black tea include:


As well as varieties, there are hundreds, if not thousands of blends, including:


And then there is Masala Chai.

Masala chai (literally "mixed-spice tea") originated in Indian subcontinent.  It combines black tea, spices native to the Indian sub-continent, milk, and a sweetener such as sugar or honey.  Masala chai has been widely recognised and adapted in the West by the locals to their liking since its introduction by the British East India company, with changes in the ingredients and the method of preparation more suited to western consumers.  Although traditionally prepared as a decoction of green cardamom pods, cinnamon sticks, ground cloves, ground ginger, and black peppercorn together with black tea leaves, retail versions include tea bags for infusion, instant powdered mixtures, and concentrates.

The term "chai" originated from the Hindustani word "chai", which was derived from the Chinese word for tea, known as "cha". In English, this spiced tea is commonly referred to as masala chai or simply chai.  Numerous coffee houses use the term chai latte or chai tea latte (essentially meaning "tea tea latte") for their version to indicate that the steamed milk, much like a regular caffè latte, is mixed with a spiced tea concentrate instead of espresso.

And then there are some teas that are not even tea.

The term herbal tea refers to drinks not made from Camellia sinensis: infusions of fruit, leaves, or other parts of the plant, such as steeps of rosehip, chamomile, or rooibos. These are sometimes  called tisanes or herbal infusions to prevent confusion with tea made from the tea plant, but more often than not, people call them “tea”.

When it comes to varieties, they are many and varied, and include:


Then, while not strictly Steampunk, there are the other punk genres, all of which fall into the domain of retro-futurism and alternative-futurism.  These include:

Beyond these variations, one blog author (Austin Sirkin, 2013) went as far as to classify individual “types” of Steampunks;

Note: Does the fact that I have put this article together make me a definer? Hmm….

Honestly though, I am not sure about you, but if I tried to classify myself using these definitions I am a Self-taught, Reader, Pseudo history nazi, Definer, Material snob, Victorian/colonial Steampunk. You?

So dear reader, as you can see, Steampunk is like tea.  It has many varieties, flavours and blends.  Some are tea (Steampunk) and others, like the herbal teas aren’t quite “tea”.  Some, like masala chai, involve people throwing a whole lot of “other” stuff at tea and make chai, but there is still tea at its core.

With that in mind, does it really matter?

I'm a traditionalist, and I like English Breakfast tea, but do I or should I begrudge others their Earl Grey, or Rose Hip, or even their Chai Latte?

In the end, we should remind ourselves that Steampunk is “Punk”.  The punk subculture originated out of working class angst and the frustrations many were feeling about economic inequality and the bourgeois hypocrisy and neglect of working people and their struggles. It was concerned with many concepts, but of them, I think those of primarily concern, and current relevance are;


One of its main tenets was a rejection of mainstream, corporate mass culture and its values.

If you ask me, that sounds like a pretty good set of values doesn’t it?  Shouldn’t we therefore be striving to make Steampunk more “Punk”?  Let us embrace the varieties, the blends, the differences.  Let us make Steampunk and it’s associated communities the most diverse, colourful and inclusive that they can be.

Because, you know what?  Sometimes some of us just want coffee…..


(Note: The purpose of The Unorthodox Society for the Elucidation of Retro-Futurism is to elucidate, educate, stimulate positive discussion and enhance the genre.  As such, this article is presented to you, the reader, with that intention.  Should you not agree with anything written here in, that is your prerogative, but please abstain from making comments that are intended to flame, troll, define, undefine, seek steamjustice or so on.  Thank you.)