It started out as a joke… 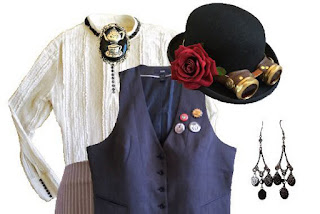 I was meeting colleagues for an EOFY celebratory drink after work. Before the prearranged rendezvous, I quickly went past the post office to pick up my delivery from draculaclothing.com and so I was the first to arrive at the pub. The big boss arrived shortly after and queried how I managed to get there before anyone else had left the office. I explained about my parcel pick-up and he asked if it was more plants (I had previously ordered live plants online and that delivery had been a bit of a fiasco… but that’s another story!)

“No, no, not plants this time. Steampunk outfits”, I explained. The inevitable question arose, so I did the usual spiel on what Steampunk is, and before my boss could conjure up images of Stevie Nicks in pirate attire (he was heading down the wrong tack with interpreting my explanation) I whipped out my mobile to show him some examples I’ve saved to my Pinterest account.

“Oh! I want to see you dressed up like that for work!” he joked… or so I thought. The next morning his disappointment was palpable for my not wearing anything remotely Steampunk to work. I protested that I couldn’t wear a corset to the office, but he wasn’t having it. So, I took him up on his challenge and steampunked it up to work a couple of days later.

Being of a practical nature, I decided on less of the full regalia, and more of, what Erika from the Antipodean Tynker would call the “Street Steam” look. Dressed in my Suffragette persona, I wore my Dogstar pinstriped skirt, Nü white blouse and grey waistcoat, resplendent with button pins, including from one Oamaru's Steampunk HQ and our very own USERs button.

My boss literally jumped for joy on seeing me all kitted up, and a week later my day of dress-ups was the feature photo in the boss's weekly update email to the whole organisation.

While I might never wear the full Steampunk shebang to work, I'm much encouraged to add Steampunk elements to my usual office attire on a more regular basis!