Navigating the genre's of retro-futurism (avoiding a steamflunk)


The various genres of retro-futurism are all about dressing up and having fun, so ultimately the important thing is to get out there and enjoying yourself.  But, it is also important to remember that they are separate genres and while some tend to blur the lines between them, there are many more who like to stick to their specific sub-genre.

So, when dressing for your next event, are you going for steampunk, dieselpunk, cyberpunk or something else entirely?  If it is steampunk, then try and stick to the basic rule.  Start Victorian and then add to it.  Because, if you don't, you may end up with a "steamflunk".

(Note: The below definition is meant in humour/satire.  We would rather someone have fun, dress-up and steamflunk, than not try at all.  In the end, having a go is the most important thing.  At the same time we the USERs are here to elucidate.)

Fail to achieve a true steampunk style.
"They really steamflunked that outfit."

From Wikipedia
Steampunk is a subgenre of science fiction or science fantasy that incorporates technology and aesthetic designs inspired by 19th-century industrial steam-powered machinery. Although its literary origins are sometimes associated with the cyberpunk genre, steampunk works are often set in an alternative history of the 19th century's British Victorian era or American "Wild West", in a post-apocalyptic future during which steam power has maintained mainstream usage, or in a fantasy world that similarly employs steam power. Therefore, steampunk may be described as neo-Victorian.

See also Steampunk 101 on this blog.

Steampunk is based on the Victorian Era, though more roughly spanning 1800 to 1914.

It is neo-victorian.  It is Victorian science fiction.  It is an alternative future based on steam power. 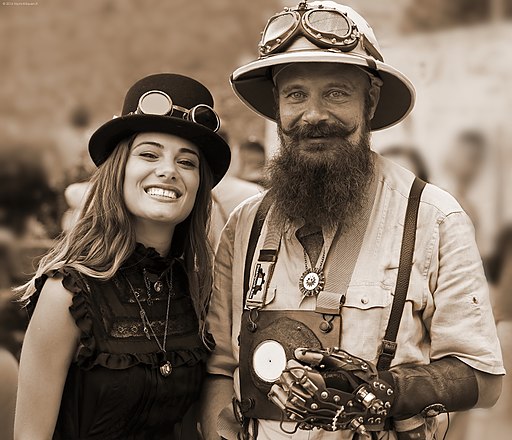 From Wikipedia
Dieselpunk is a genre similar to that of its more well-known cousin "steampunk" that combines the aesthetics of the diesel-based technology of the interwar period through to the 1950s with retro-futuristic technology and postmodern sensibilities. Coined in 2001 by game designer Lewis Pollak to describe his role-playing game Children of the Sun, the term has since been applied to a variety of visual art, music, motion pictures, fiction, and engineering.

Dieselpunk is based on the period roughly spanning the years from 1920 to 1960.

It is about aeroplanes, automobiles and motorcycles.  A new era of fast machines, pinup girls, Big Bands and Swing music. 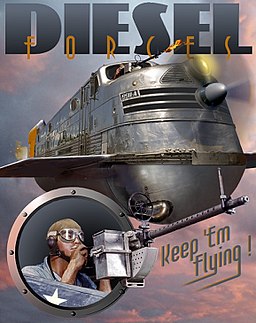 From Wikipedia
Decopunk is a recent subset of Dieselpunk, inspired by the Art Deco and Streamline Moderne art styles of the period between the 1920s and 1950s. In an interview at CoyoteCon, steampunk author Sara M. Harvey made the distinctions "...shinier than DieselPunk, more like DecoPunk", and "DieselPunk is a gritty version of Steampunk set in the 1920s-1950s. The big war eras, specifically. DecoPunk is the sleek, shiny very Art Deco version; same time period, but everything is chrome!"

From Wikipediahttps://en.wikipedia.org/wiki/Dieselpunk#Atompunk
A similar, related pop surrealist art movement, which overlaps with dieselpunk somewhat, is atompunk (sometimes called atomicpunk). Atompunk art relates to the pre-digital period of 1945-1965, including mid-century Modernism, the Atomic Age, Jet Age and Space Age, Communism and paranoia in the USA along with Soviet styling, underground cinema, Googie architecture, the Sputnik, Mercury and other early space programs, superhero fiction, the rise of the US military/industrial powers and the fall-out of Chernobyl.

From Wikipedia
Cyberpunk is a subgenre of science fiction in a future setting that tends to focus on society as "high tech low life" featuring advanced technological and scientific achievements, such as information technology and cybernetics, juxtaposed with a degree of breakdown or radical change in the social order.

Cyberpunk is set in the near future.

It is high tech, dystopic and grungy. Full of invasive modifications to the human body. 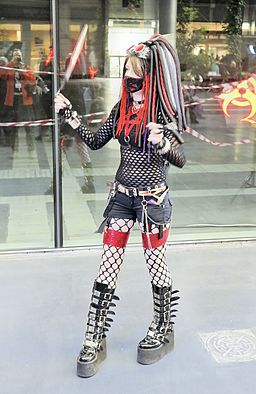